Some crowd-members discouraged others from giving the organizers an audience. Sanah Choudhry | The Montclarion

On Wednesday, a crowd gathered outside Alexander Kasser Theater when anti-LGBTQ+ protesters unaffiliated with Montclair State University had organized on the stage of the nearby amphitheater.

The protestors were protected by both campus police and their own security, and a crowd of Montclair State students and a few faculty members gathered around to watch and counter-protest. The organizers were shouting several of their core beliefs, telling the students that they were sinners.
Carmela Winter | The Montclarion

The organizers were not only protesting the LGBTQ+ community, but also voicing their opinions on women’s rights, Islam and sex. They were holding signs with phrases such as, “Whores get S.T.D.s,” “A women’s place is in the kitchen” and “Gamers are murderers.” Students gathered to protest the organizers. Carmela Winter | The Montclarion

Montclair State students were fighting back by constantly counteracting their discriminatory remarks and interacting with the organizers directly in one-on-one conversation. 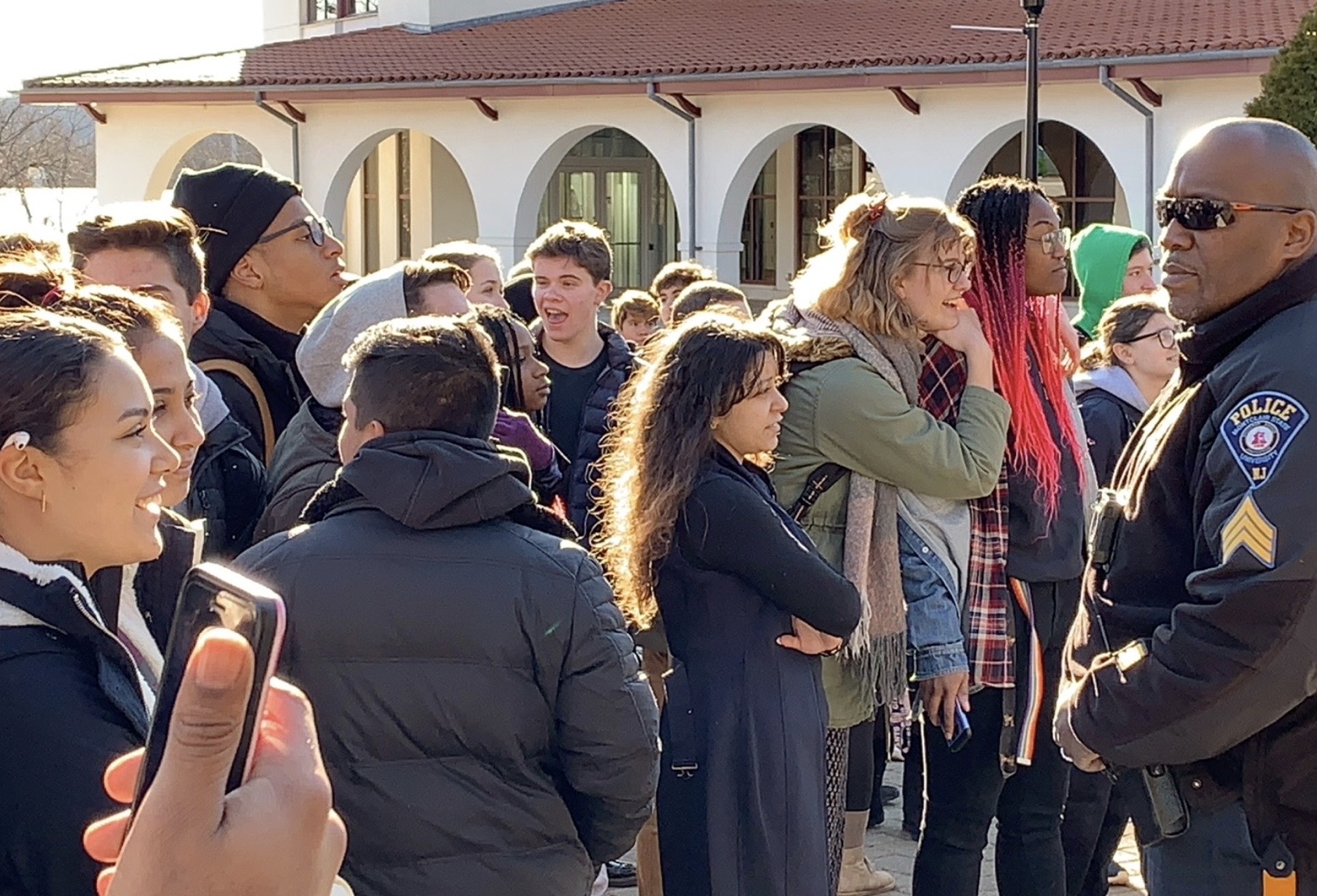 A same-sex couple holds onto each other as the organizers denounce the LGBTQ+ community. Brielle E. Wyka | The Montclarion

Students came together as a community, in support of the LGBTQ+ rights and other communities the organizers were protesting. The crowd worked together to drown out the protestors voices with these chants and voices of unity. Same-sex couples took selfies kissing each other and others took group pictures in front of the organizers to mock the presentation. Students made their own signs to protest the organizers.
Brielle E. Wyka | The Montclarion

Freshman filmmaking student Tristan Alexander was one of the more passionate voices in the crowd.

“I think it’s really fun to [mess] with bigots who are wrong and see them constantly be so pathetic,” Alexander said. “I think we should stand up to them. Why not be mean to a homophobe?” Students made their own signs to counter-protest the organizers.
Kris Fernandes | The Montclarion

Nicole Wigfall, a staff member for the Center of Cooperative Media, walked by and expressed her concern about students involvement and the organizer’s motivations.

“If these people are not a campus group, then I think it’s wrong for them to be here to rile students up regardless of knowing whether they’ll have an audience and the fact that students are pretty liberal about [these issues],” Wigfall said. The organizers spoke out about a number of beliefs, not just their anti-LGBTQ+ sentiments. Kris Fernandes | The Montclarion

During the protest, Rocky the Red Hawk and his team arrived to bring higher spirits to the crowd as he went around to give hugs, high-fives and candy. Some of the crowd moved their attention to the school’s mascot, wanting to take pictures and engage in a more lighthearted event, but refocused their attention toward the organizers once Rocky left.

Steven Grossman, a junior psychology major, commended the spirit of the school.

“I believe in humanity and seeing all these people gathered here to stand together against this bigotry on this campus is really awesome,” Grossman said.