The men's basketball team is currently tied for eighth in the national polls. Photo courtesy of Montclair State Club Basketball

There’s an underlying power when it comes to athletics at Montclair State University and it doesn’t involve any of the traditional varsity athletic teams.

Sitting with an overall record of 8-3-1 (4-1 in conference), the Montclair State men’s club basketball team is reaching new heights.

The team was founded during the 2011-2012 academic year, a season where they went 9-0. Other than the 2020 season, which was canceled due to the coronavirus (COVID-19) pandemic, they have been going strong ever since.

In 2016, the Red Hawks joined the National Club Basketball Association (NCBBA) which is known to be one of the fastest-growing intercollegiate club basketball leagues in the United States. In their 11-year history, only one player has been named an All-American (Sidney Dawkins during the 2019-2020 season) and they have had five players move up to play in the NCAA.

So far this season, it has been nothing short of historic for this squad as they are currently looking to defend their Atlantic East Conference title from the 2019-2020 season. On top of that, they have reached new heights by being tied for eighth in the most recent NCBBA Phenom Elite Rankings. 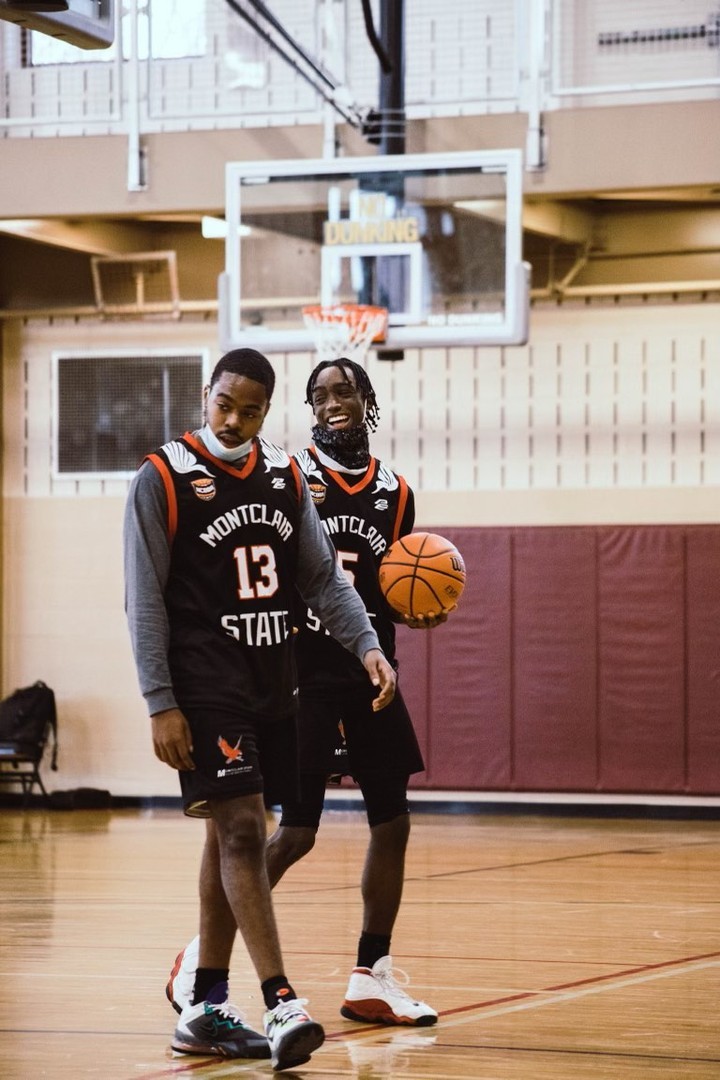 Al Fogler (#13) and MJ Moncrieffe (#5) are two of the captains on the men’s club basketball team.
Photo courtesy of Dan Dreisbach

Senior guard and captain Taishawn Chavis has been with the team since his freshman year and he reflected on what it means to be nationally ranked.

“It makes us feel nice,” Chavis said. “It makes you feel like the work you’re putting in matters.”

Chavis plays a key role for the Red Hawks as a veteran presence on the team. Much of their success has stemmed from the leadership of Chavis on and off the court.

Chavis believes that because they are like a family, they are confident in one another and just as determined as anyone else.

“I think [our success comes from] our confidence and that we really are a group of brothers,” Chavis said. “When we go out and play a team, you have to play all 13 of us. We all trust each other, so when you go out there, it’s [like] playing basketball with your family, and a lot of teams can’t do that.”

Being able to keep up this pace after a mid-season break is going to be very difficult. However, head coach Adrian Perry believes this team is special.

“I think there’s just a commitment to excellence we haven’t had on the team in a long time, if ever,” Perry said. “I think these guys are just gritty. This is definitely the toughest team I’ve had.”

For the Red Hawks, talent has never been the issue; it is a matter of bettering oneself that matters, not just individually but as a whole unit, and that’s what the team has been doing this season. The Red Hawks are dangerous across the board. They are loaded at every position and they believe that if they don’t beat themselves, they can beat anyone in the country.

“We’re a dangerous unit; we are deep,” Perry said.

Defensively speaking, the Red Hawks have made points hard to come by as they are only giving up 59 points per game. On the other side of the floor, they are arguably even better as they average 72 points per contest and rank first in the North Atlantic Conference (NAC) in point differential.

On Nov. 6, the Red Hawks recorded the biggest win of the season and maybe of all time, when they defeated the University of Vermont, who is now ranked No. 1 in the entire nation. MJ Moncrieffe was named as one of the NCBBA national players of the week in December. Photo courtesy of Dan Dreisbach

As the second half of the season approaches, junior and captain MJ Moncrieffe leads a confident Red Hawks team that’s full of energy and massive expectations.

“I try to set an example,” Moncrieffe said. “I try to be the person [the team] could look up to and be like, ‘Oh, that’s how you get better and that’s how you work on your weaknesses.’”

Not only has Moncrieffe stood out for Montclair State, but he has also been one of the best players in the entire NCBBA.

Moncrieffe is the team’s leading scorer with 14 points per game and was named NCBBA Player Of The Week after he averaged 16.5 points and 5.5 rebounds in two games against the University of Connecticut (UConn) during week six.

For Moncrieffe, it was a symbol of validation for his terrific play on the court.

“It was a good feeling, it shows that the hard work that I put in is finally paying off,” Moncrieffe said. “But, all the credit shouldn’t go to me. My teammates go out there and play just as hard as I do every day, so I feel like we’re all national players of the week.”

Montclair State still has a lot of work to do to get where they want to be, but with a championship on the horizon, they are as motivated as ever. The Red Hawks currently sit at a 8-3 record on the season.
Photo courtesy of Dan Dreisbach

Perry spoke to just how important his captains are for this team.

“I’ve had them [on the roster] since they were freshmen,” Perry said. “I cannot speak any more highly of [Chavis and Moncriffe]. These are two of the best leaders I’ve seen on this campus.”