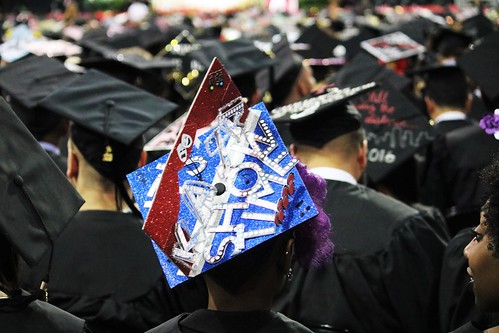 With their black gowns blowing in the wind and one hand firmly holding their matching caps in place, Montclair State graduates rushed from their cars and pulled away from their families’ embraces towards the entrance to the Prudential Center. Despite the early hour and blaring heat, the excitement for the day ahead – one they have been looking forward to for the past four years – fueled their every step.

As families and friends, teachers and mentors, took their places inside the arena, the age-old song that echoes through the air of any university graduation across the nation began to play. In turn, the graduates from each school began their procession – looking up into the crowd with the hope of catching a glimpse of their loved ones, the proud smiles on their faces and the tears of joy in their eyes. After a roaring applause from the audience, the graduates took their seats and were greeted by none other than the university president herself, Susan Cole. In her brief speech, Cole outlined the importance of the momentous occasion and spoke fondly of the past four years the graduates had endured to be seated where they were today.

At the same time, Cole asked for a moment of silence for the students that had lost their lives in the past year – “those who will never have the chance to stand where you stand [as graduates of Montclair State University].” She also extended her gratitude to those who had been whisked away from their educational studies to serve in the nation’s military.

However, perhaps it is her final words that rang the most true for those in both the stands and the graduates sitting before the stage. “Now, it is time to celebrate,” said Cole with a victorious raise of her arms and a huge smile across her face. Following Cole’s words of encouragement, Major League Soccer (MLS) Commissioner Don Garber, took the spotlight as he received his Doctorate of Letters from the university himself. As the event’s keynote speaker, he then looked out onto a sea of black caps decorated with everything from favorite characters to memorable quotes and began his speech to the 4,000 graduating students sat before him.

“First, you don’t need to know where you’re going,” said Garber, poking fun at the corniness of his own words. However, according to Garber, one shouldn’t worry if the future ahead looks fuzzy because it’s one’s internal compass which will lead them to their true north.

Still, this north is not a destination as much as it is a passion, which brought Garber full-circle to his second point: “Find something that you really, really like and pursue it.” Referencing the fact that 30 percent of the graduating class is the first in their family to attend and gradate from a university, Garber said the students before him were more capable than they thought and that he truly did believe they would go far.

The third and final point on Garber’s list was to be fearless. After meeting Nelson Mandela several years ago, Garber learned an important lesson about life itself and shared it with the graduates: that courage is not the absence of fear, but the triumph over it. In other words, despite the fear that may lie in the back of one’s mind, “life is about authentically facing your journey each and every day.”

Even though many, including Garber, noted that the graduates may look back on commencement and not remember who spoke, they will remember the words that were said. Thus, Garber left the graduates with these final few words: “Who you are will be defined by the decisions you make when no one is watching, think about that.” Following the speech, students Kamila Kolodynska and Michael Sickles were invited to the front of the stage to represent the greetings from the graduate students and senior class, respectively. In their brief words, the two were able to profess both their love of Montclair State as well as their excitement for the future ahead – earning laughter and applause from the audience surrounding them.

Finally, Cole returned to the podium to confer the degrees upon the graduating students and officially present the Montclair State University Class of 2016. As she did so, a roar of applause could be heard from even outside the arena as the thousands of graduates cheered for the moment as well as the years of schooling they had finally conquered.

With the university’s Alma Mater still hanging in the air, the graduates headed out into the late-May heat and into the arms of awaiting family and friends. In a sea of confusion, smiles and tears, friends attempted to seek one another out for a final picture together while others carried fresh bouquets of flowers and balloons back to their cars.

As far as the eye could see, Montclair State colors lined the streets and surrounded the arena as waves of graduates began to leave behind the university they had called home for the past four years and into a new, different one. All the while, keeping their memories of Montclair State in the back of their minds for years to come.